Mr. Emmert limits his practice to appellate advocacy in the state and federal courts. He has briefed and argued numerous significant cases that have resulted in published opinions in a variety of fields of the law.

Mr. Emmert limits his practice to appellate advocacy in the state and federal courts. He has briefed and argued numerous significant cases that have resulted in published opinions in a variety of fields of the law.

Mr. Emmert has been with the firm since 1999, when he returned to the private sector after spending nine years in the Virginia Beach City Attorney’s Office. It was in this role that he developed the skills of an appellate advocate, as he represented the City and its officers, employees and agents in a variety of appellate cases. Those included numerous challenges to municipal authority; major tort and Eminent Domain litigation; tax and valuation appeals; and the nation’s first appellate interpretation of the Telecommunications Act of 1996. 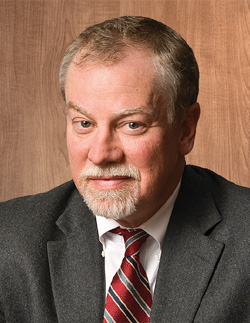 Since returning to the private sector, Mr. Emmert has accepted appellate challenges in a larger number of cases across many fields. He reconstituted the Virginia State Bar’s Appellate Practice Subcommittee and chaired that group from 2005-08, making him the principal spokesman for Virginia’s appellate lawyers. He then accepted an invitation from the Virginia Bar Association to establish a new Appellate Practice Section within that association; he chaired that section from its founding in 2008 to 2011. He was a member of the Supreme Court’s Appellate Rules Advisory Commission, and is the current chair-elect of the Boyd-Graves Conference. He is listed in The Best Lawyers in America in the field of Appellate Law, and in November 2007 was honored by the Virginia Lawyers Weekly as one of 15 “Leaders in the Law”. Mr. Emmert has received a “AV” rating by Martindale-Hubbell, and was the first person ever profiled in Virginia’s Legal Elite in the field of Appellate Law.

Mr. Emmert is a frequent lecturer on appellate advocacy before a variety of bar associations. He has served as the program moderator for Virginia CLE’s two most recent comprehensive programs on appellate advocacy. He introduced to Virginia the symposium method of teaching appellate lawyers, covering individual topics in depth with very small groups of attorneys, to ensure maximum interaction between faculty and attendees. He drafted the Supreme Court’s program of assigning volunteer panel attorneys to represent indigent civil litigants in that court. In 2008, he organized and produced Virginia’s first Appellate Summit, gathering appellate jurists and lawyers from across the Commonwealth.

Mr. Emmert is probably best known in the Virginia legal community as the founder and publisher of the website Virginia Appellate News & Analysis (www.virginia-appeals.com), which offers same-day analysis of appellate opinions, plus news and essays about appellate advocacy and appellate practice in the Commonwealth.